Some Thoughts on Interest Rates & Inflation

Having traded well before and through The Great Recession in 2008, some things have changed, but a lot hasn’t. Here are some of my observations based on my own experiences. And don’t be afraid to think for yourself.

It’s no secret that the rich run the world. They hold positions of power, run large corporations and have lots of connections (with other wealthy people). Now some rich people are up to no good (think Bernie Madoff and company), but by and large most wealthy folks do a lot of good. Regardless if it is for recognition or from the goodness of their hearts, I think we can all agree giving is good.

When the people who own businesses have more money coming in, they can do things like invest in new technology, experiment with research development and in turn hire more people to help their companies grow.

Hiring = jobs = opportunities for the not as rich.

People are better off (financially) when they have a job, but more importantly they feel better off even if they’re paying more for things. Ask yourself, would you rather have a job and be able to pay for things, even if those things cost a bit more. Or would you prefer to have no job, but the things you have to buy are cheaper, but since you don’t have a job you can’t afford them anyways.

A massive loss of jobs is what hurt folks in 2008 and what people think of when they hear the word “Recession.” Not being able to pay their mortgage and thus leading to foreclosure. But a Recession just means a slowing of economic output. There have been times that we’ve been in a recession that people don’t even realize because they still have a job and are able to put food on the table.

Why The Fed raising interest rates is not good for inflation?

The time to raise interest rates is when things are going good. When the rising interest rates can fly under the radar because people are on the up and up. Think back to as recently as the mid 2000’s. CDs and saving accounts were earning 5-6%.

The chart below shows interest rates for the last 25 years. Click on the image for an interactive link.

Inflation hurts the low income consumer. What we have is a supply and demand problem and interest rates won’t solve that.

Higher interest rates are only making things worse. Demand for homes is high and supply is low. New home buyers can’t afford to buy as much house because mortgage rates have climbed so many have left the demand side of the equation, but on the flip side developers also have to pay more for loans and thus are slowing the building of new homes which limits the supply side of the equation.

Home prices are not coming down because there is still enough demand to meet the supply houses for sale. Many Baby Boomers are sitting on the sidelines with cash and so are the “doom and gloomers” hoping for a market crash so they can buy up houses at a discount. The trouble with this is there are so many folks on the sidelines even the slightest dip will cause a small number of those waiting to jump in and prices will never really fall, they’ll just flatten out.

So the increased interest rate just hurts the low income and new home buyers, while the upper middle class and wealthier Americans are able to buy 2nd and 3rd homes with cash and build their rental portfolio. I’m not saying this is bad, just making the observation on the divide.

Who Are The Losers?

The people who are getting hurt the most and potentially losing jobs are those low income folks we just spoke of and the ones that rising interest rates affects the most.

Raising the interest rates does not lower the demand for food or gas. Higher interest rates only reward those with cash savings and in turn hurt lower income Americans.

What I Think We Should Do

I wish we could have continued to raise interest rates in 2019 when Yellen was chair. However given where we currently are at with rates coming off zero I would prefer to have seen rates stay low to allow continued growth in tech (more jobs) and younger folks the ability to buy homes. Yes, it’s a competitive housing market, but raising the interest rate will only decrease demand a small amount. Interest rates have no effect on cash buyers and young families are still itching to get into their first home so they will be looking to smaller, cheaper, communities with remote work options.

Leaving rates along would give the supply chain more time to sort itself out and catch up with that demand which will subside on its own (it’s just happening slower than the Fed would like).

So really what we have here is a plumbing problem (supply & demand) that is trying to be fixed by an electrician (The Fed). While plumbing and electrical are both components of a house (the economy) they can’t be fixed by each others tools.

If we have 9 or 10 or 15 percent inflation, but people still have their jobs and are able to make money, we are better off than if we have more folks out of work because companies are laying off workers due to higher interest rates and slower economic growth. I say leave interest rates alone and let the supply and demand regulate itself. The economy will slow and it will grow. Forcing its hand by rapidly raising interest rates only makes a mess of things.

About Tim Racette
Tim is a trader in the futures and stock markets and founder of EminiMind.com. He is also a Chicago-land native, competitive mountain biker, adventurer, and ASU Sun Devil currently living in sunny Scottsdale, AZ. 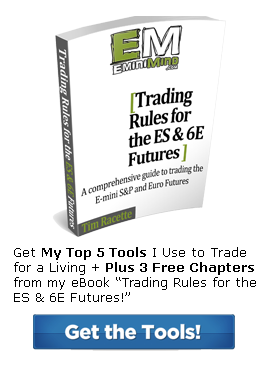